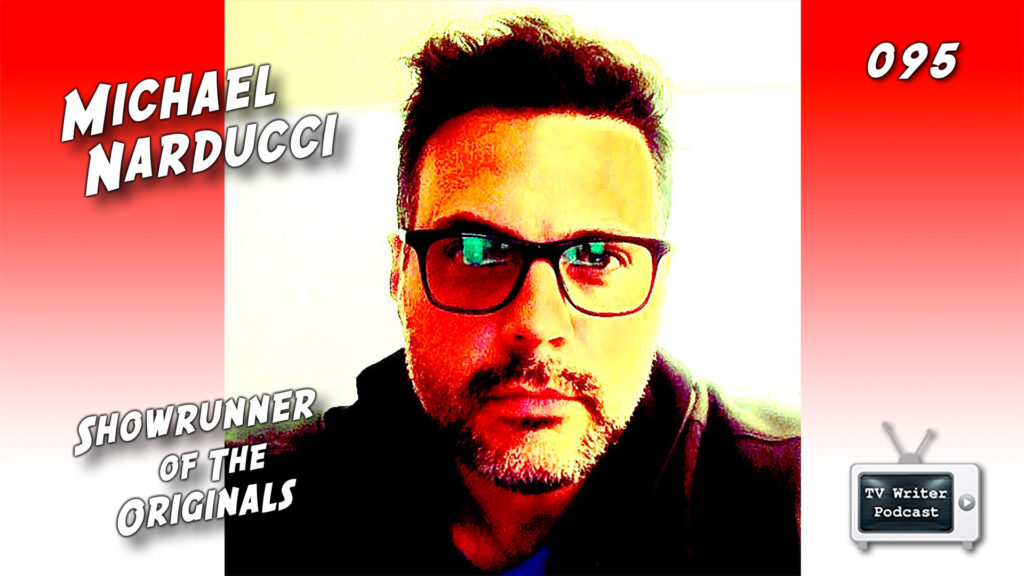 This week, host Gray Jones interviews Michael Narducci, showrunner and EP for The Originals, co-EP for The Crossing, and writer and producer for The Vampire Diaries.

Episode 095 is sponsored by Pilar Alessandra of onthepage.tv. Pilar is offering a 10% discount on any of her services: to get your 10% off, reach out to Pilar directly and mention the TV Writer Podcast.

Currently working on an as yet unannounced Netflix series, Michael recently developed Warriors through ABC Studios. Prior to that, he was the showrunner of The Originals for Warner Brothers TV, and also served as a writer on The Vampire Diaries, Medium, The 4400, and The Crossing.

2:01 – Interview start
2:38 – how COVID-19 is affecting him and his work
6:16 – how he went to Harvard and lettered in football but ended up doing an MFA in creative writing
8:38 – how he published short stories, taught in school for several years, and started writing specs
11:50 – how the Warner Brothers writing fellowship helped him get his first staff gig and an agent
14:43 – on landing the staff gig without going the traditional route of being an assistant
18:15 – on having a manager since before the WB program, and what he feels managers offer
20:18 – in between series, what happens? Details about show runner meetings and pitching.
22:57 – landing the gig on Medium after a lot of unsuccessful interviews
24:49 – landing the gig on Vampire Diaries, and what made that show different
27:51 – traveling to New Orleans to research the Originals spinoff, moving up to EP
28:53 – getting an overall deal, and consulting on The Crossing
30:54 – on development
31:09 – what showrunners are looking for in interviews
32:42 – Michael shares about many mentors who have helped him along the way
36:04 – on being a learner, and a team player – references the book Difficult Men, and the masculine vs feminine style of showrunning
39:28 – his showrunning on The Originals, mentoring others
41:30 – on having an overriding principal idea for each season, with examples from each season of The Originals
45:08 – why mentoring and giving back is important to him, and the value of story
50:00 – on development, and some of the projects he has developed
56:17 – what he is most passionate about – common cause, ensemble shows where people begin as adversaries but grow together, and making people care about characters and story.
1:00:22 – hardest thing about being a TV writer
1:04:10 – best part about being a TV writer – the “what if” brainstorming sessions, and collaboration with other writers to develop story, working with incredible actors and seeing it come to life on scene .
1:06:26 – what is positive in the industry and what needs to change?
1:07:42 – how much more diversity there is in writers rooms now, and how it is a great time to break in
1:09:35 – advice to greener writers – what he looks for when interviewing and reading scripts, and mistakes he sees people making, including on social media.