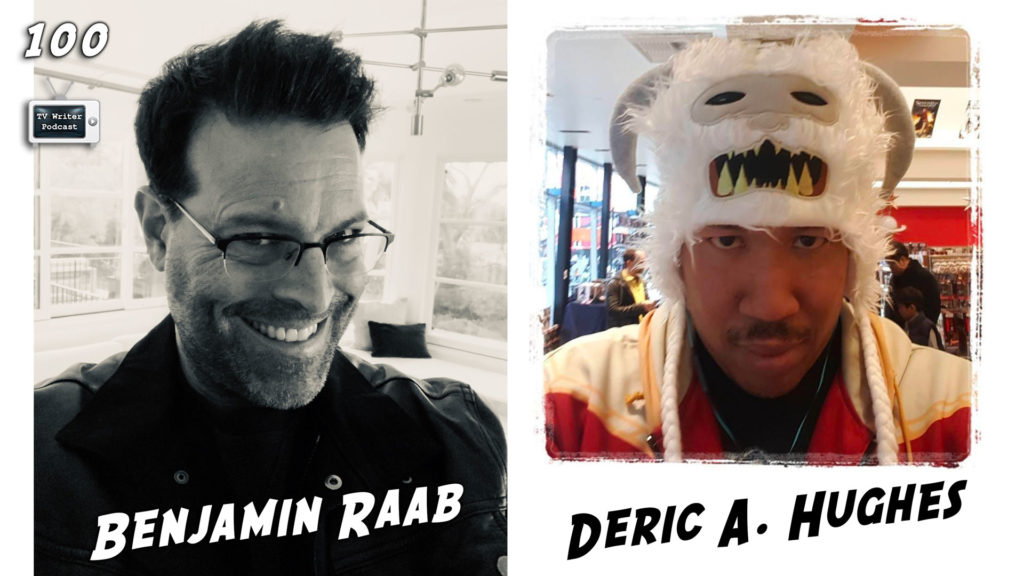 This week, host Gray Jones interviews writer/producer team Benjamin Raab and Deric A. Hughes, currently co-executive producing Legacies on the CW, who have written and produced on Arrow, Scream: the Series, The Flash, Beauty and the Beast and Warehouse 13.

Episode 099 is sponsored by Pilar Alessandra of onthepage.tv. Pilar is offering a 10% discount on her interactive-online class “Rewrite Techniques,” running Four Saturdays, May 23 – June 13. To get your 10% off, use the code onthepage10 at checkout.

Benjamin Raab and Deric A. Hughes have written together for almost 20 years. Ben got his start in comic books, which led to their “geek cute” in a comic book shop. They describe how it took many years of writing and applying, including for for a comic book series and web series, and multiple years applying for fellowships, before they finally landed a spot in NBC Writers on the Verge.

While still in that fellowship, they were staffed on Warehouse 13, and have high praise for the positive creative environment fostered by showrunner Jack Kenny (interviewed in episode 2). From there, they wrote on Beauty and the Beast, The Flash, Scream: The Series, and Arrow, before landing a co-EP gig on Legacies.

They also describe their experience in the Showrunner Training Program, what they’ve learned, and how important it is to mentor others and “pay it forward.”

0:00 – Fun blooper from the interview.
2:01 – Interview starts, Ben & Deric describe the “geek cute” of their writing partnership, in a comic book shop.
4:44 – Deric tells about his background, and what led to them writing together.
6:52 – the years of hard work from when they started writing together to when they got into NBC Writers on the Verge, including writing a comic series and web series.
13:59 – Their experience getting into and attending the Writers on the Verge program, then staffing on Warehouse 13 while still in the program.
17:39 – Their experience writing on Warehouse 13 under showrunner Jack Kenny
21:30 – Discussion about going to set for their episodes, and different showrunner philosophies. Do they focus on trying to get work with showrunners they like? Also about stepping stones in your career.
27:12 – Puppy cameo! (Also 50:07)
31:23 – On getting fired from shows, bad showrunner experiences. Other trials and tribulations.
39:22 – Sponsor break
40:21 – All about the Showrunner Training Program — how a lot of being a good showrunner boils down to being good communicator, and hiring the right people to do each job (and then letting them do their job).
52:44 – The mentoring they’ve received, and paying it forward.
1:00:56 – Advice to greener writers – be patient, check your ego at the door, listen, learn, never stop being a student.

PLEASE NOTE: starting today we are moving to simultaneous Tuesday releases on all platforms. Watch for us each week on Podbean (video), Podbean (audio), YouTube (video), Spotify (audio), iTunes (video), iTunes (audio), at scriptmag.com, and of course here at tvwriterpodcast.com.