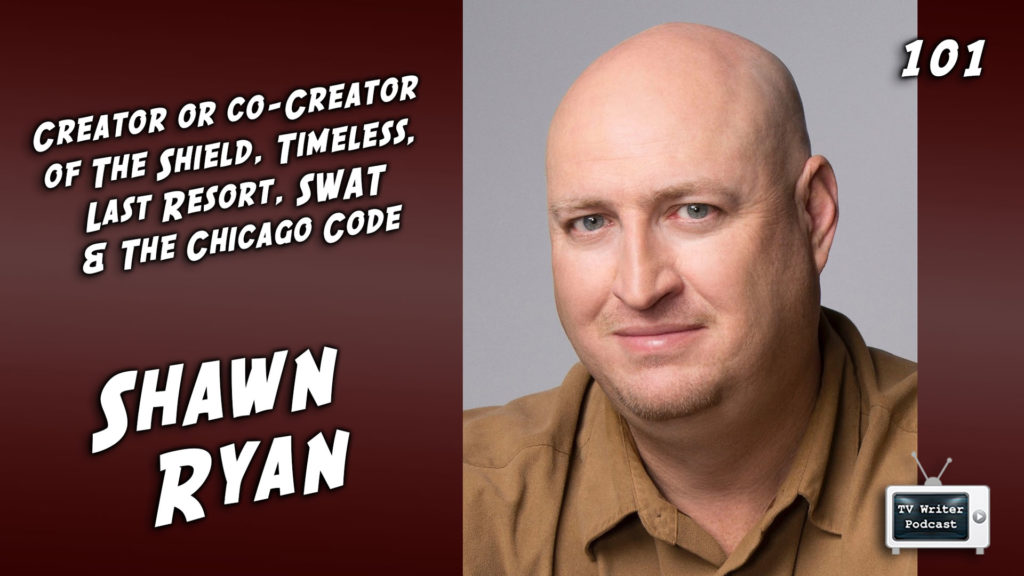 This week, host Gray Jones interviews veteran producer Shawn Ryan, who has created or co-created a number of series, including The Shield, The Chicago Code, Last Resort, Timeless, and his current series SWAT.

This episode is sponsored by Pilar Alessandra of onthepage.tv. Pilar is offering a 10% discount to TV Writer Podcast viewers. To get your 10% off, contact Pilar through her website and mention the podcast.

Shawn Ryan started out writing and acting in plays. He won the prestigious Norman Lear Playwriting Award, which included an opportunity to come to Los Angeles and observe the TV series My Two Dads. One of his pitches got turned into an episode for the series, and he knew he wanted to write for TV! But it would be several years of hard work, honing his craft and writing over a dozen spec scripts, before he finally got his first staff gig on Nash Bridges.

Timeless fans will be especially excited to hear about how he co-created that show with Eric Kripke, the love he has for the show and the fans, and how hopeful he is for future continuation of the story.

1:22 – Interview start, overview of creating and helping to create and run shows in a competitive industry.
3:24 – How has COVID-19 affected him?
7:18 – Back at the beginning, how did winning the Normal Lear Playwriting Award help launch his career? Discusses theater and playwriting, then going to Hollywood to observe My Two Dads as part of the award, and starting to pitch ideas on the show.
10:56 – Harder times after that show, getting days jobs and learning to increase his work ethic. Was a clever writer, but needed to learn the craft of being a deep writer.
12:28 – Wrote 16-17 spec scripts… talks about the 3 most important factors in breaking in.
14:53 – His first staff gig on Nash Bridges, after writing freelance episodes of Life with Louie.
16:54 – How the years of struggle are important for a writer.
19:23 – How not getting hired on Buffy the Vampire Slayer was actually better for his career — describes this training ground on Nash Bridges with Carlton Cuse and John Worth in detail, and working on Angel. Learning to become valuable to a show by being a story machine.
25:31 – How The Shield was born out of a spec pilot he had written… how he didn’t have much production experience but was open about what he didn’t know and relied on good people around him to succeed. Lots of detail about building this show for the new FX Network.
37:44 – The next few years, successfully developing many projects, working on The Unit with David Mamet, Mad Dogs. Getting excited about projects.
41:48 – Sponsor messages.
43:02 – All about co-creating Timeless with Eric Kirpke, and running that show. How he loves history, and the book The People’s History was a great resource for stories. How amazed he is by the fans, and how he is hopeful about the show’s future.
51:27 – How he feels about Peak TV as a show creator. Will TV decline the way movies did?
54:22 – Advice to younger writers, and to people trying to break in. How he asked to read a spec that was getting that writer work, and studied it. Learned not to settle for B+ work.