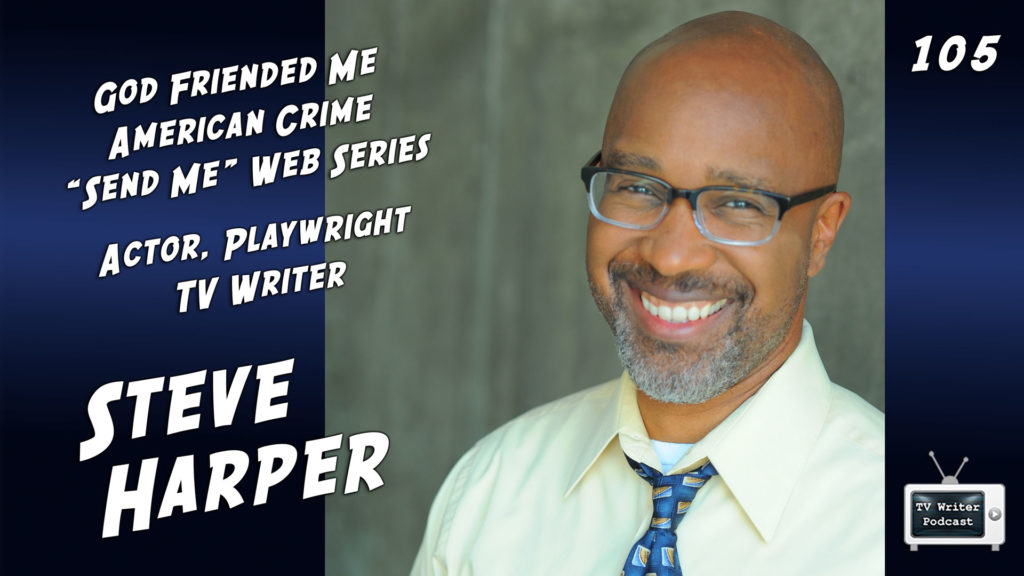 In this interview, Steve shares how his acting and playwriting experience has helped him in his TV writing, the way the CBS Writers Mentoring Program helped him to win in showrunner meetings, how adapting in a gap in his career resulted in a hit web series that kickstarted the next leg of his career, and tips for networking. He also shares about the current racial unrest, challenges he has faced as an African American writer, and where he sees Hollywood needs to change going forward, in the diversity in writing staffs, and in the stories that are told.

Steve Harper is a native New Yorker who grew up in a house with a Catholic father and a mother obsessed with Stephen King and true crime novels. He enjoys writing character-based dramas that (sometimes) make use of magical realism.

Steve served as producer on the CBS show “God Friended Me.” He was co-producer on the upcoming HBO Max series “Tell Me Your Secrets” and wrote for ABC’s “American Crime” (created by John Ridley). Steve spent two seasons on the USA network’s “Covert Affairs.”

He has written more than 20 plays, which have been workshopped and produced in New York, L.A. and in between. He also coaches writers through his company Your Creative Life. Steve is a graduate of Yale, The A.R.T. Institute for Advanced Theatre Training at Harvard, Juilliard’s playwriting program and the CBS Writers Mentoring Program.

INDEX TO THE EPISODE:
01:57 – Interview start, discussing Steve’s background and influences.
04:13 – Studying at Yale, Harvard, and Juilliard, and writing over 20 plays — how playwriting can be an excellent training ground for TV writers.
14:03 – His acting work, and how that also helped prepare him for TV writing.
16:26 – Being accepted to CBS Writers Mentoring Program, and what the experience was like.
19:30 – What he learned about how to win in showrunner and other meetings, and lots of detail on how to network after the meeting.
27:14 – Getting on his first writing staff, on Covert Affairs… learning the culture of the room, and how to contribute to the stories being told.
32:40 – After Covert Affairs… 3 whole years of not being staffed, how he adapted, and did the web series “Send Me,” which got an Emmy nomination for the series lead, and led to his new series, “American Crime.”
36:55 – How Steve feels about the current racial tensions, and the challenges he has faced as an African American writer and actor. What can be done to change the situation? What can change Hollywood, both in diversity of hiring and in the stories that are told?
51:46 – Advice for greener writers: cheerful persistence, adapting and be continuously developing new material. Also what inspires you? Proactively reach out to people.