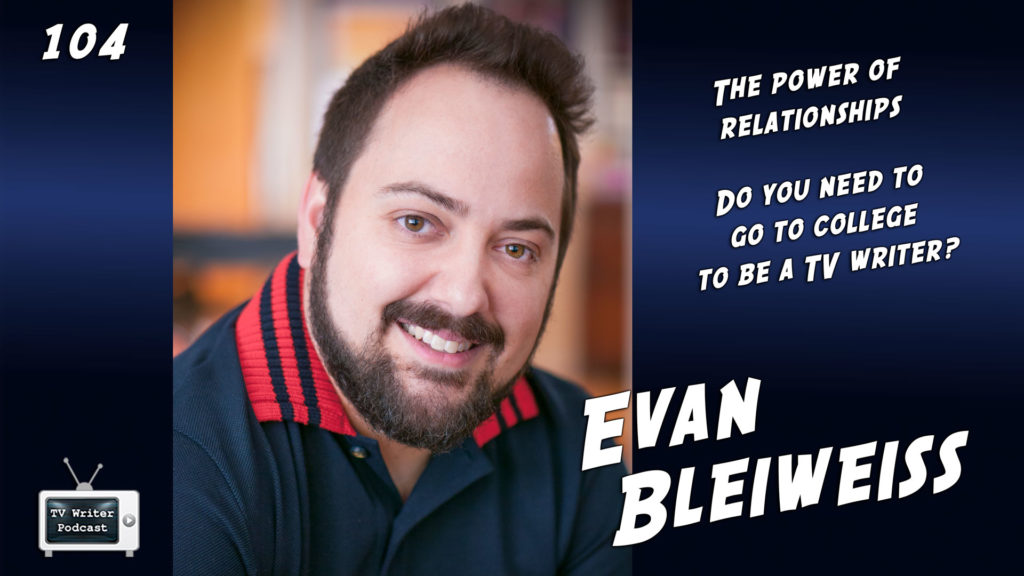 This week, host Gray Jones interviews writer-producer Evan Bleiweiss, who has written for “The Vampire Diaries,” “Rosewood,” and “The Crossing,” and has sold several TV pilots, though he never went to college.

Evan Bleiweiss grew up on Long Island, but his family moved to Los Angeles in time for him to attend high school here. It was a teacher’s encouragement of his unique voice that led him to pursue writing… and it just so happened that he played hockey with then-unknown Shawn Ryan. Shawn gave him an opportunity to intern on the pilot of “The Shield,” but then encouraged him to take some time to hone his craft before really trying to break in. That’s exactly what he did… and another relationship led to him being hired onto the series in season 4 as a post-PA. By the 7th season, he was a writer’s assistant, and ended up co-writing the penultimate episode of the series.

You might see a pattern emerging… Evan credits many of his opportunities and successes to taking the time to foster relationships. He shares many great stories about staffing on “The Vampire Diaries,” “Matador,” “Black Sails,” and then the full run of “Rosewood,” where he rose to supervising producer level. His many sold pilots include a remake of “Big Trouble In Little China,” which is an amazing story of a pilot he wrote on spec WITHOUT the rights, but ended up being contracted to do a paid rewrite.

Evan has a lot of advice for greener writers, and he shares how a strong work ethic, the willingness to study hard and hone his craft, active networking, and the fact that he was already based in LA made it possible for him to break in without a college degree..

INDEX TO THE EPISODE:
2:16 – Interview start; Evan’s background, how a high school teacher inspired his interest in writing for film & TV.
6:00 – How playing hockey with Shawn Ryan led to him becoming an intern on “The Shield.”
8:00 – How Shawn Ryan encouraged him to take time to hone his craft, and he started writing together with a friend of his.
10:41 – How they wrote a play together that got produced in LA.
11:32 – How another hockey buddy led him to apply for a post PA job on “The Shield,” which he did for over 2 seasons and learned a ton.
16:24 – How on his 3rd season at “The Shield,” he applied to be a writers assistant and got the job.
17:07 – how he proved himself invaluable by being an encyclopedia of everything that had happened on the show, and he ended up co-writing the second-last episode of the series.
20:01 – Discussion about how he didn’t need to go to college to break in.
21:18 – Discussion about his representation.
21:57 – Using the 2008 Writers Strike to write a killer spec pilot, and wrote a TV version of “Big Trouble In Little China” (without permission), and the crazy circumstances that led to him being contracted to re-write it as a real pilot.
26:13 – On getting an agent and writing his next pilot.
28:36 – His first staff gig on “The Vampire Diaries.”
31:26 – Leaving “The Vampire Diaries” after 2 seasons, when his daughter was born. Took time off, then was staffed on “Matador.”
34:18 – How he landed on his feet when his show was unexpectedly cancelled, and ended up working on “Black Sails” season 3.
37:24 – How an old friend he kept up with led him to work on “Rosewood,” which was his first chance to be on a series from beginning to end.
40:06 – How another relationship led to him working on “The Crossing.”
41:37 – Getting back to developing his own projects, selling a couple of pilots. with a stint on “See” for Apple and the upcoming show “Archive 81” for Netflix.
45:34 – Coping with COVID-19.
46:25 – What mistakes he sees younger writers making. Learning to break story very quickly, and to write quickly. Not being precious with your ideas. Writing specs to practice writing the voice of the show runner.
52:47 – How he never saw not going to college as a disadvantage.
55:25 – Who his mentors have been over the years. How he feels you need to be always learning. Watching a show while reading the script to study it. Fostering relationships.
59:00 – Advice to younger self – reassurance that you are on the right path, even if things are hard. Don’t give up! If you work really hard and persist, people will notice. Throw yourself all the way in — read lots of scripts, study, put the work in to learning your craft.