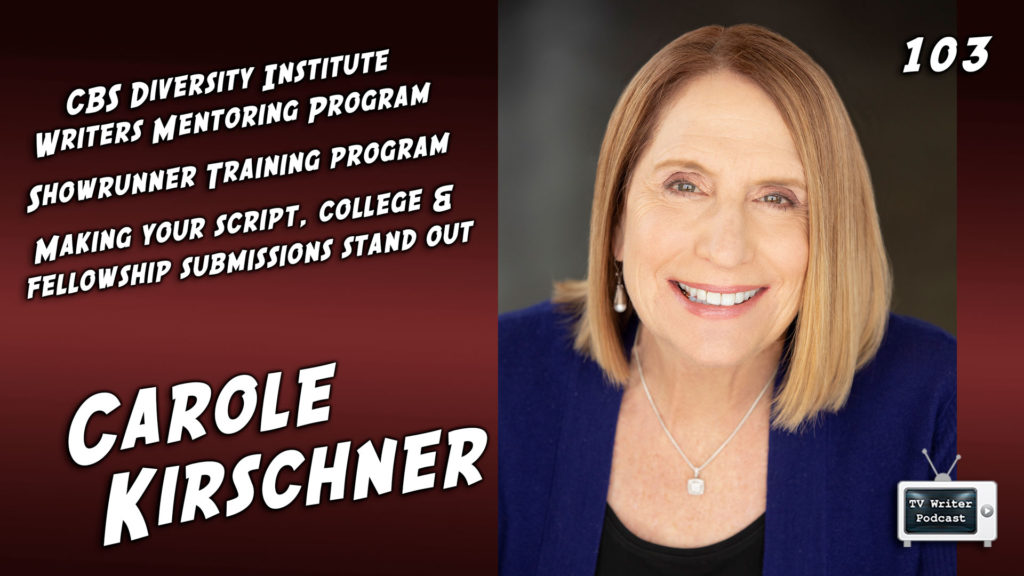 This is Carole Kirschner’s third appearance on the podcast — be sure to check out her first interview in episode 054, where she talked about her own career path through the industry and her excellent book, Hollywood Game Plan. Her second appearance was in Gray’s well attended panel at San Diego Comic-Con called “How to Write a TV Pilot,” in episode 085.

In this new interview, Carole reveals tons of great tips on how to stand out from the rest of the pack in your submissions to the CBS Diversity Writers Mentoring Program. Her advice is also applicable to the other writing fellowships, and college applications as well. She also has great tips on what makes or breaks writing samples, and shares at length about the Showrunner Training Program and the current state of the industry.

Having worked as a senior level television development executive for eighteen years (including her posts at CBS and as head of Steven Spielberg’s first Amblin Television), Carole has read over heard over 3,000 pitches, read more than 1,000 scripts, bought hundreds of projects and was involved in developing dozens of television series.

She is currently the Director of the Writers Guild of America’s Showrunner Training Program, the creator and Director of the CBS Diversity Writers Mentoring Program and is consulting with the Jewish Writers Initiative Program.

She’s also an author and international speaker. In her role as an entertainment career coach she helps aspiring writers, producers and directors navigate Hollywood as they break in and move up in the entertainment industry.

Her book, Hollywood Game Plan: How to Land a Job in Film, TV and Digital Entertainment, published by Michael Weise Publishers, is taught in film schools and universities around the country.

INDEX TO THE EPISODE:
0:00 – Introduction
4:01 – Interview start, discussing how the industry has and hasn’t changed since she published Hollywood Game Plan 8 years ago. How she considers it easier to get your content produced, and social media is playing a bigger role.
8:20 – Main topic of interview — expanding on her Twitter thread discussing script submissions to CBS Diversity Institute Writers Mentoring Program. What is the program and why would someone want to apply for it?
12:15 – 6-8 are chosen each year from over 1,300 submissions. What will make your application stand out?
13:22 – How the letter of interest/personal essay is a writing sample.
19:30 – Story submissions – make it something only you can write, but universal.
22:02 – Need genuine life experience, not just being inspired from TV you’ve watched. Read other mediums, not just TV.
26:13 – What makes a compelling spec episode? Do stunt scripts work?
35:08 – Why stay within one genre? Finding your sweet spot and sticking to it. What will you bring to the room?
40:12 – How many are disqualified for not following instructions, and why?
42:53 – What is the track record of the program?
44:19 – Sponsor break.
45:30 – All about the Showrunner Training Program, moving from being a writer to a manager, delivering quality scripts on time. What does the program offer? Who is eligible?
52:40 – What is its track record?
56:41 – What is the landscape like for breaking in to television writing in 2020, virus aside? How she finds people aren’t working hard enough on their careers.
59:58 – How important is a college education now?
1:01:05 – How is COVID-19 changing the way someone might break in?
1:03:17 – Final advice and call to action.

John Vorhaus is best known as the author of The Comic Toolbox: How to be Funny Even if You’re Not. This seminal book on writing comedy for television and film is now available in four languages, and continues to be a definitive source of information and inspiration for writers from Santa Monica to Scandinavia.

An international consultant in television and film script development, Vorhaus has worked for television networks, film schools, and production companies in 30 countries on four continents.

Vorhaus’ own screenwriting credits include Married… with Children, Head of the Class, The Sentinel, The Flash and many overseas television shows and films, including the sitcoms House Arrest and Pretty, Sick and Twisted, and the movie Save Angel Hope.

John is also the author of the six-volume Killer Poker series, plus miscellaneous other books on the subject, including the novel Under the Gun, a “how-to whodunit” set in the world of high stakes tournament poker. His other novels include The California Roll and its upcoming sequel, The Albuquerque Turkey.

Vorhaus is a graduate of Carnegie-Mellon University and a member of the Writers Guild of America. He has taught writing at Northwestern University and the American Film Institute, and lectured for such disparate groups as Mensa and the New Jersey Romance Writers Association.

Jen Grisanti is a story career consultant, independent producer, writing instructor for Writers on the Verge at NBC, blogger for The Huffington Post and author of the new books, Story Line: Finding Gold in Your Life Story and TV Writing Tool Kit: How To Write a Script That Sells.

Jen spent 12 years under the mentorship of Aaron Spelling, eventually running Current Programs at Spelling Television Inc., covering all of Spelling’s shows including Beverly Hills, 90210, Melrose Place, and Charmed. In 2004, Jen was promoted to VP of Current Programs at CBS/Paramount, where she covered such shows as Medium, Numbers, NCIS, 4400, and Girlfriends. While at CBS/Paramount, she served as a mentor in the CBS Diversity Program, which seeks out and nurtures young writers and directors.

In January 2008, Jen launched Jen Grisanti Consultancy Inc., a consulting firm dedicated to helping talented writers break into the industry. By drawing on her 12-year experience as a studio executive where she gave daily notes to executive producers & showrunners, Jen personally guides writers to shape their material, hone their pitches, and focus their careers. Since launching, Jen has worked with over 300 writers working in television, features, and novels. In the first three years, already 20 of her clients have staffed as writers on television shows and two have sold pilots that went to series. In 2008, Jen was hired to be the Writing Instructor for NBC’s Writers on the Verge.

Her brand is Developing From Within. Her company hosts Storywise Seminars and Teleseminars as a way to get this message out. In addition to her books, she has CDs and workbooks, and also has an excellent Storywise Podcast Series available on iTunes and her website.