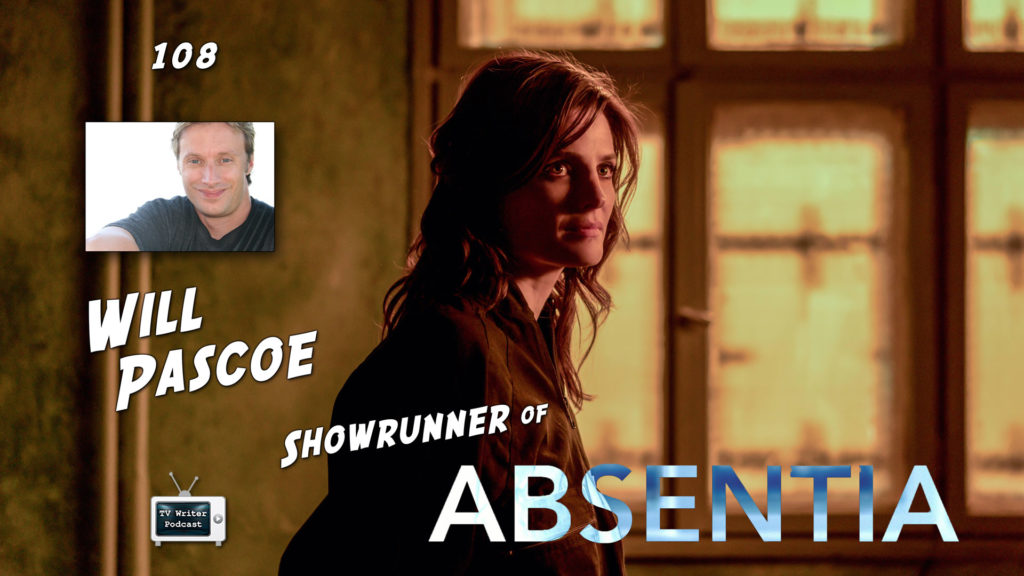 This week, host Gray Jones interviews Will Pascoe, showrunner of “Absentia.” Will also wrote for such shows as “The Finder,” “Orphan Black,” “Da Vinci’s Demons,” and “Shut Eye.”

This episode is sponsored by Pilar Alessandra of onthepage.tv. Pilar is offering TV Writer Podcast listeners a 10% discount on any of her services. To get your 10% off, reach out to her directly and tell her Gray sent you!

In this episode, Will has great tips on how not to get fired when you first get on staff, work/life balance, crafting your voice, standing out among the competition, and mentoring others. He also talks about running “Absentia,” including some of the challenges with shooting on another continent.

COVID-19 NOTE: though it was shot in person, safety was maintained through masks when not shooting, long lenses to separate camera and talent, shooting outdoors, and maintaining social distance.

Originally from Canada, Will Pascoe is an award-winning television writer and occasional documentary film director. After writing half-hour television series like “Degrassi,” Will made the jump to writing one-hour television dramas full-time, working on the military-medical series, “Combat Hospital” for ABC and Sony. He then went on to work on Fox’s short-lived series, “The Finder,” and later won a Humanitas New Voices prize and received a blind script deal with Fox to develop his own television show.

He then became an upper-level writer and co-producer on BBC America’s, “Orphan Black.” His episode “Variations Under Domestication” was selected by Entertainment Weekly as one of the best hours of television of the decade and won Will a Writer’s Guild Award and nominations for an Edgar Allan Poe Award and a Hugo Award (where he lost to his idol George R.R. Martin for his “Game of Thrones” “Red Wedding” episode). As well, “Orphan Black” won Will a Peabody Award for his work on the series.

0:25- Interview start, talking about Will’s origins in Canada.
2:26 – First professional writing credit became infamous episode of “DeGrassi.”
3:35 – His first staff job on “Combat Hospital.”
4:42 – Thanks to Hart Hanson, landed a gig on “The Finder,” his first Hollywood show.
5:27 – How he learned to write TV mostly self taught, reading books and scripts, and doing a lot of writing, crafting his own voice.
8:34 – How directing documentaries has influenced his writing, becoming a student of human behavior and interaction, and trying to understand the world.
9:53 – Many of his scripts have stood out… discusses the “Orphan Black” episode which was selected by Entertainment Weekly as one of the best hours of television of the decade.
12:04 – About winning the Humanitas New Voices Award, selling a pilot to Fox, and moving to Los Angeles (including victories and challenges, and immigration).
19:07 – Comparing his path to the more traditional way of breaking in to Hollywood.
21:56 – Sponsor break.
22:54 – Talks about his experience in the Showrunner Training Program, learning about work/life balance for a showrunner. How the information and network of relationships has helped him in the time since.
30:29 – Coming in cold as the showrunner for “Absentia.”
33:31 – The challenges with shooting in Bulgaria, including a funny story about language barriers.
38:21 – Will’s development process, and some of the projects he’s developing.
41:53 – On pitching his material… pitching with slides, and why it’s more difficult via Zoom. Funny stories about Zoom calls.
47:29 – Positives that may come from COVID-19 — better treatment of production crews, better conditions on set.
51:56 – Differences between Canadian and American shows. How new staff writers are treated in each, and advice for new staff writers in US shows. Asking more established writers frequently for a “temperature check” — how did I do in the writers room this week? How more mature writers should go out of their way to encourage newer writers.
57:10 – How Will mentors other writers. Paying it forward.
58:20 – Advice to newer writers, in interviews and on the page. Have ideas for the show, and know the show really well.
1:02:22 – How to stand out among the competition. Make the showrunner’s job easier, constantly push yourself to improve your writing, and always keep learning. Leave your comfort zone, and challenge yourself with different types of writing.