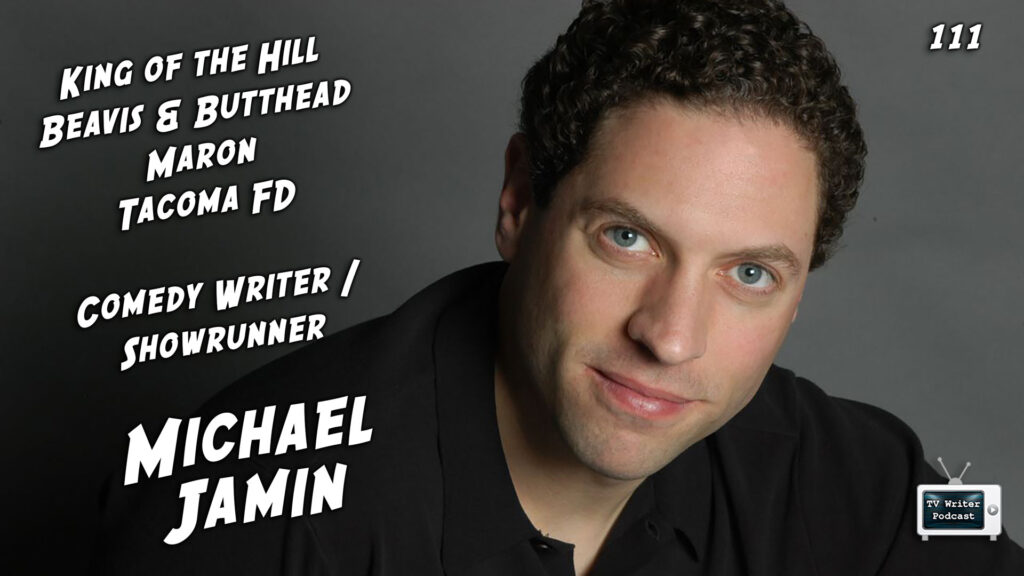 This week, host Gray Jones interviews Michael Jamin, TV comedy writer and showrunner who has written on such shows as “King of the Hill,” “Maron,” and “Beavis and Butthead,” and is currently a consulting producer on “Tacoma FD.”

This is the 20th weekly episode since quarantine started, and I am taking a 2-week break before resuming right after Labor Day. I am actively seeking new showrunners and upper level writers to interview, so if you know anyone you think would be a good fit, please reach out.

For the past 25 years, Michael Jamin has been a television writer and showrunner.  His many credits include “King of the Hill,” “Wilfred,” “Maron,” “Beavis and Butthead,” “Brickleberry,” “Just Shoot Me,” “Rules of Engagement,” “Tacoma FD” and many more.

Get 3 lessons from Michael’s new class “The Showrunner’s Guide to TV Writing” for FREE! Visit michaeljamin.com/gray/ for details.

1:43 – Interview start, Michael’s backstory, having the desire to write but no experience. Got a few PA jobs, and then while working on “Lois & Clark” he and his writing partner Sivert Glarum had a chance to pitch an episode, which became one of the highest rated episodes of the season.
5:19 – When he first got representation, and how it didn’t really help him… was when he first got on staff for “Just Shoot Me” that things really took off. Shares what it was like when he first got on staff and didn’t feel he was contributing. Speaks about his mentors during the 4 seasons he was on the show, and some of the advice they gave.
8:17 – Landed the job on “King of the Hill,” where he also wrote for 4 seasons. Speaks about how at that time, it was much more common to jump from show to show as you negotiated more money or a better position.
10:05 – When he and Sivert started running the room, on “Glenn Martin, D.D.S.” Talks about difference of running the room and writing for animation and live action, single camera vs multi-camera.
11:20 – Fun stories about running the room in live action for the first time, on “Maron.”
13:57 – Talks about his development process, where he finds ideas and projects.
14:50 – His most recent show, “Takoma F.D.”
16:08 – Sponsor break.
17:14 – All about Michael’s new TV & screenwriting online course, “The Showrunner’s Guide to TV Writing.” Visit http://michaeljamin.com/gray for 3 free lessons.
20:32 – State of the industry now vs 20 years ago — easier to break in, but harder to make a living.
21:29 – How he hustles for work — doesn’t depend on his agent, and is constantly writing new material.
23:03 – Aside from his course, suggests reading and studying lots of scripts.
23:55 – Advice to greener writers… write and work on your craft every day. What separates a mediocre script from a good script? In interviews? What gets a writer fired from a staff?
28:59 – What does he wish he had known when he started out? How to break a story. How to learn that skill.
30:41 – How to make it long-term in this business — be nice to people.09