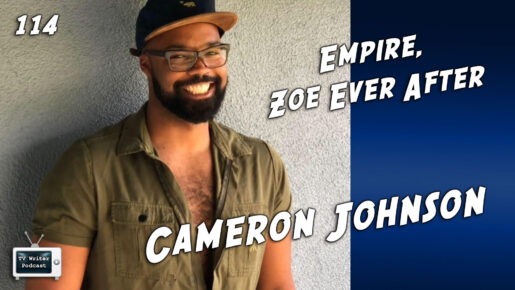 This week, host Gray Jones interviews Cameron Johnson, TV writer on ‘Empire‘ and ‘Zoe Ever After,’ who has sold several pilots.

Cameron Johnson grew up in the Bay Area and studied political science at USC, because if you tell your family you’re going to be a lawyer, you don’t just commit to the bit – you get a degree in it. However, while there, he secretly pursued an additional education in screenwriting.

After several torturous years prepping the best and brattiest of Brentwood for the SAT, he became a writer on the BET show ‘Zoe Ever After.’ He then sold ‘White People Problems,’ an hour dramedy about a wealthy, dysfunctional black family to Bravo, and is currently redeveloping it as a half-hour for Peacock.

Cameron has spent the past two seasons working on Fox’s ‘Empire‘, where he wrote and produced six episodes and managed the 160,000 follower writers’ Twitter account. He also sold ‘Diversity Hire,’ a satirical look at race in the workplace, to Fox in 2019.

Buying Final Draft screenwriting software? Use this link to support the podcast: tinyurl.com/BuyFinalDraft.