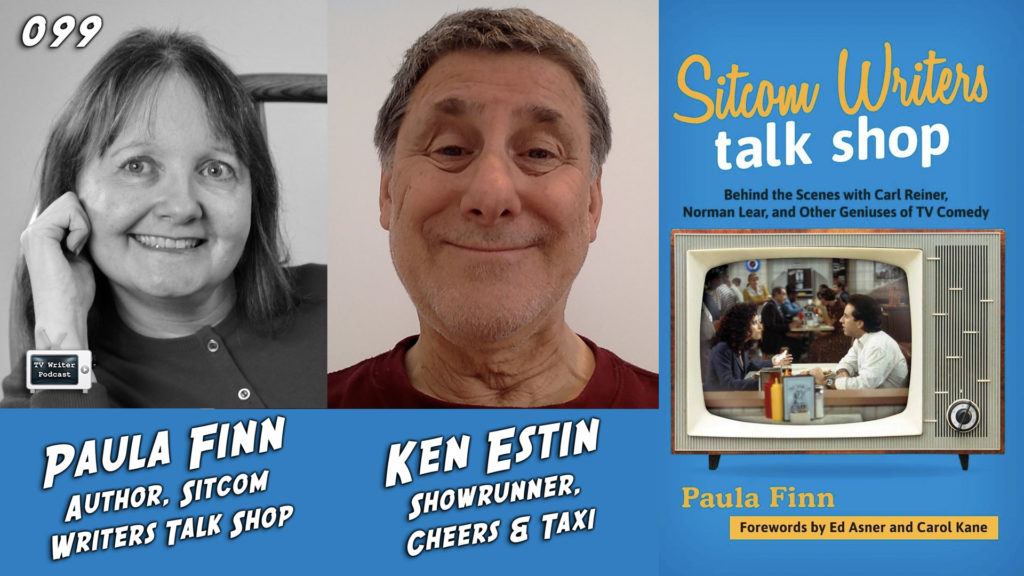 Episode 099 is sponsored by Pilar Alessandra of onthepage.tv. Pilar is offering a 10% discount on her interactive-online class “Rewrite Techniques,” running Four Saturdays, May 23 – June 13. To get your 10% off, use the code onthepage10at checkout.

Paula Finn grew up in the shadow of her late father Herbert Finn, who wrote on such classic comedies as The Honeymooners, The Flintstones, and Gilligan’s Island. This also gave her unique access for her book. In Sitcom Writers Talk Shop, Paula interviewed some of the greatest names of the genre: Carl Reiner, Norman Lear, James L. Brooks, Phil Rosenthal, and many more.

Ken Estin, one of her interviewees, is also in this interview; he tells compelling stories of his unique path into the industry, becoming a showrunner of an Emmy-winning series within 2 years of getting on staff, running Taxi and Cheers, and creating The Tracy Ullman Show. He gives great advice and insight on comedy writing, and how writing sitcoms differs from single camera comedies.

2:39 – Interview start.
3:10 – Paula talks about growing up in the home of veteran comedy writer Herbert Finn, what she learned from hanging around sitcom sets.
4:47 – What led to her writing the book Sitcom Writers Talk Shop, and what it was like to interview the greats like Norman Lear, James L. Brooks and Carl Reiner.
7:45 – Ken discusses writing on Taxi, and having to have big jokes, and other differences between writing then and now.
11:28 – Ken shares about his unique path into the industry, sending a Bob Newhart spec script to the Bob Newhart show… how that led to staffing on Taxi, and what he learned while writing that show.
18:57 – How Ken became the showrunner of an Emmy-winning show within 2 years of getting on staff, and then later ran Cheers.
22:55 – Ken talks about some of the careers that were made on Taxi.
25:50 – Sponsor ads.
26:50 – Specifics of comedy writing – coming up with ideas and jokes, and if there are rules to follow.
31:01 – What is the best part about writing comedy? The hardest?
34:43 – What is different about writing single camera comedies?
37:09 – Ken discusses creating the Tracy Ullman Show.
41:30 – How do veteran comedy writers feel about the state of the industry now?
43:11 – Paula shares highlights of interviewing the great comedy writers for her book, and what the response has been to it.
47:20 – Advice to someone starting out in comedy writing.

Upcoming weekly interviews will include Shawn Ryan (creator of Timeless and The Shield), writers from Arrow, The Flash, Legacies and Warehouse 13, and lots more! PLEASE NOTE: there will be no episode the week of Memorial Day, and we will be moving to Tuesday releases in June, to line up with Script Magazine’s release dates.